It’s good and cold. January cold. The ice is thick, hard, smooth. The skates are sharpened. For Minnesota sport enthusiasts that can only mean one thing: pond hockey.

This weekend, teams from across the country (and the world) will take the ice for competition in many hockey divisions in the U.S. Pond Hockey Championships on Lake Nokomis, “the way nature intended.” Growing up beyond Minnesota’s borders, I don’t have the same connection and memories that pond hockey has for many athletes, young and old, in and around the Twin Cities. Hockey is a part of their athletic DNA and it only seems natural that our area would host an amateur tournament for weekend players—yet the tournament doesn’t have a long history.

In 2005, Fred Haberman, co-founder of the public relations firm Haberman, came up with the idea when he thought fondly of his younger days playing hockey with his friends on a frozen creek near his home. If such a tournament existed, who would play? Who would come and watch? In 2006, the first event took place: 120 players from around the globe entered, drawing tens of thousands of spectators to watch players on more than 25 rinks shoveled atop the ice of Lake Nokomis. (Appropriately enough, the winning teams are engraved into a golden shovel.)

Sport Ngin is the company behind the USPHC. We are a highly skilled team specializing in the execution of world-class sports content strategy, design, marketing and technology... and we LOVE hockey.

No one is more near and dear to our hearts than the organization who founded this incredible tournament eight years ago: Haberman, a media + marketing firm. Their vision still inspires every aspect of this great event.

We are proud to be associated with organizations who value "the pond" as much as we do. Please thank the 2013 USPHC "Hat Trick" Sponsors: Bud Light, Muscle Milk, Tria Orthopaedic Center, Mountain Khakis, Grit and Moonlit Sports. We kiss the ice you skate on!

A huge thanks to George Monson & Sons, the incredible snow removal and ice-ops crew that works through our crazy Minnesota weather to create the breathtaking rinks that grace the surface of Lake Nokomis! 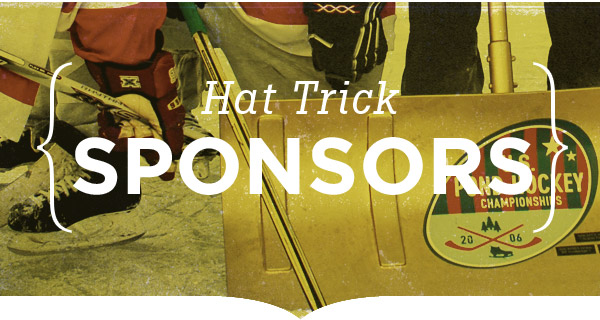