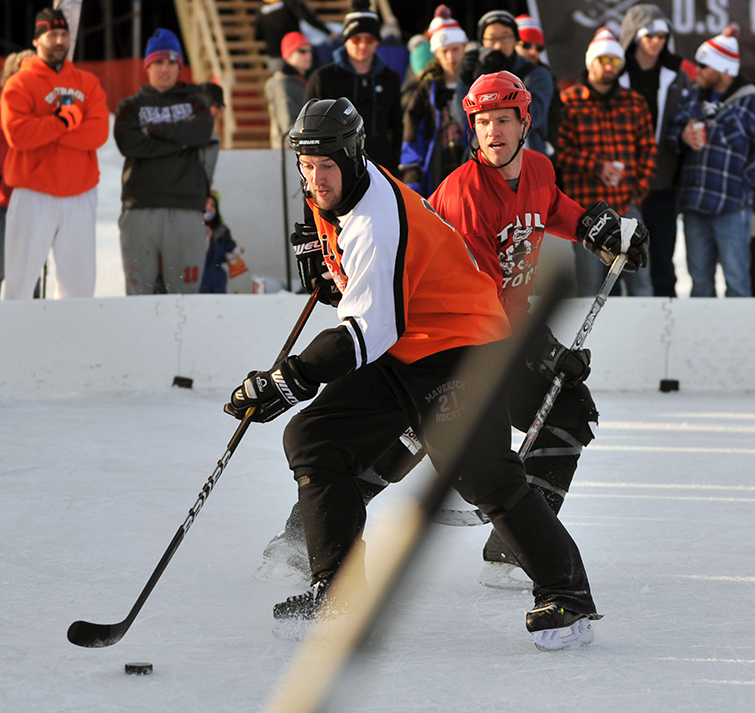 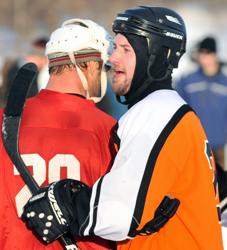 Brad Thompson scored four goals for Wright Homes Over 40 on Sunday in its 6-3 triumph over Tail Gators. Photo by Loren Nelson

Brad Thompson wasn’t looking for a new team, wasn’t shopping his services around, wasn’t angling for a big payday.

Heck, there is no payday in pond hockey. At least not in terms of cash.

So when the undisputed Kings of the Pond came calling, what was Thompson going to say?

“I played one season for Muscle Milk, and then (Wright Homes Almost 40) needed a defenseman the next year and called me up,” Thompson said. “It was like I got called up from the AHL (to the NHL).”

While Thompson originally signed on as a defenseman, on Sunday afternoon at sun-drenched Lake Nokomis he was scoring clutch goal after clutch goal -- four of them in all -- to lead Wright Homes to a 6-3 triumph over Tail Gators in the championship game of the Open Division of the U.S. Pond Hockey Championships.

The title was the fifth in nine years for Wright Homes, which won the inaugural tournament in 2006 and has taken the Open Division title every other year since. No team has ever repeated as champions.

The now-disbanded Whiskey Bandits, which won titles in 2007 and 2011, is the only other team with more than one Open championship.

“It’s too tough to win two in a row,” said Dave Bakken, one of three original Wright Homes team members still on the team. “WoodStars won it last year, and I think WoodStars is probably the best team in this tournament, and they lost in the first round this year because they won it last year.

The back-to-back hex certainly was in play for WoodStars, which entered Championship Sunday with a 4-0 record and No. 1 seed, having won its pool play games by an astounding combined score of 47-4. 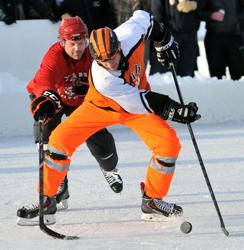 Dan Donnette of Wright Holmes Over 40 shields the puck from Joe Dustin of the Tail Gators. Photo by Loren Nelson

Bad bounces and unlucky breaks can end even the best teams’ tournament early out on the pond, especially on Sunday when all of the pool play winners are, typically, evenly matched.

“The bounces, there are a lot of bounces out there, and the ice is a big even-upper,” said Bakken, the head boys’ hockey coach at St. Paul Como Park. “Anybody can win any game.”

Wright Homes, which has played in all but two of the nine title games, has proven to be almost impenetrable to such upsets because its skill level, airtight defense and vast database of pond hockey experience is so superior to that of most opponents.

It doesn’t hurt to have sharpshooters such as Thompson, a former St. Louis Park standout who played at Minnesota State. He broke a 2-2 halftime tie on Saturday by scoring three of Wright Homes’ four second-half goals.

Thompson twice scored from long range, and his other goal, which had the elbow-to-elbow crowd gasping in disbelief, was of the no-look, behind-the-back variety.

“I just went to my backhand and kind of threw it and hoped somebody was going to the net,” Thompson said. “And it went in.

Thompson, 32, works as a coach and trainer at FHIT. Among his co-workers are Wright Homes teammates Geno Parrish and Dan Donnette.

“Those three are just great players,” Bakken said while nodding toward Thompson, Parrish and Donnette as the trio posed for a picture.

Tail Gators, also a long time pond powerhouse, is a spin-off of Wright Homes. Danny Hendrickson and Dave Shute both have played previously for Wright Homes in its early incarnations (Shute won two championships as a member of the team). Eventually, the Wright Homes’ talent pool became large enough for two teams, and thus Tail Gators, with Hendrickson and Shute leading the way, was born.

“They are a great group of guys, and we all skate together,” said Hendrickson, the younger brother of former NHLer and current Minnesota Wild assistant coach Darby Hendrickson. “A lot of the guys have been skating together for 15 years. That’s a lot of games, and a lot of beverages after the games.

“It was a lot of fun to compete against them today.”

Hendrickson hosted a two-team party Friday after the first day of the tournament. Tail Gators and Wright Homes Almost 40 were the participants. Good friends and great hockey players sharing laughs and swapping stories.

“We are all best friends,” Bakken said. 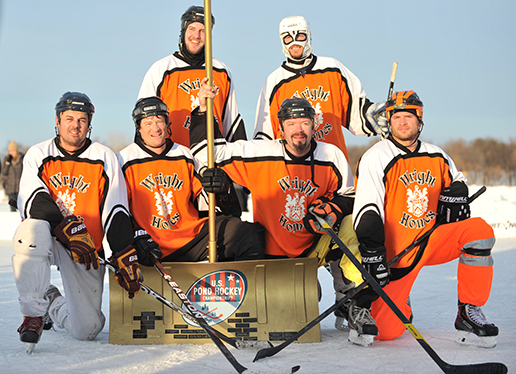