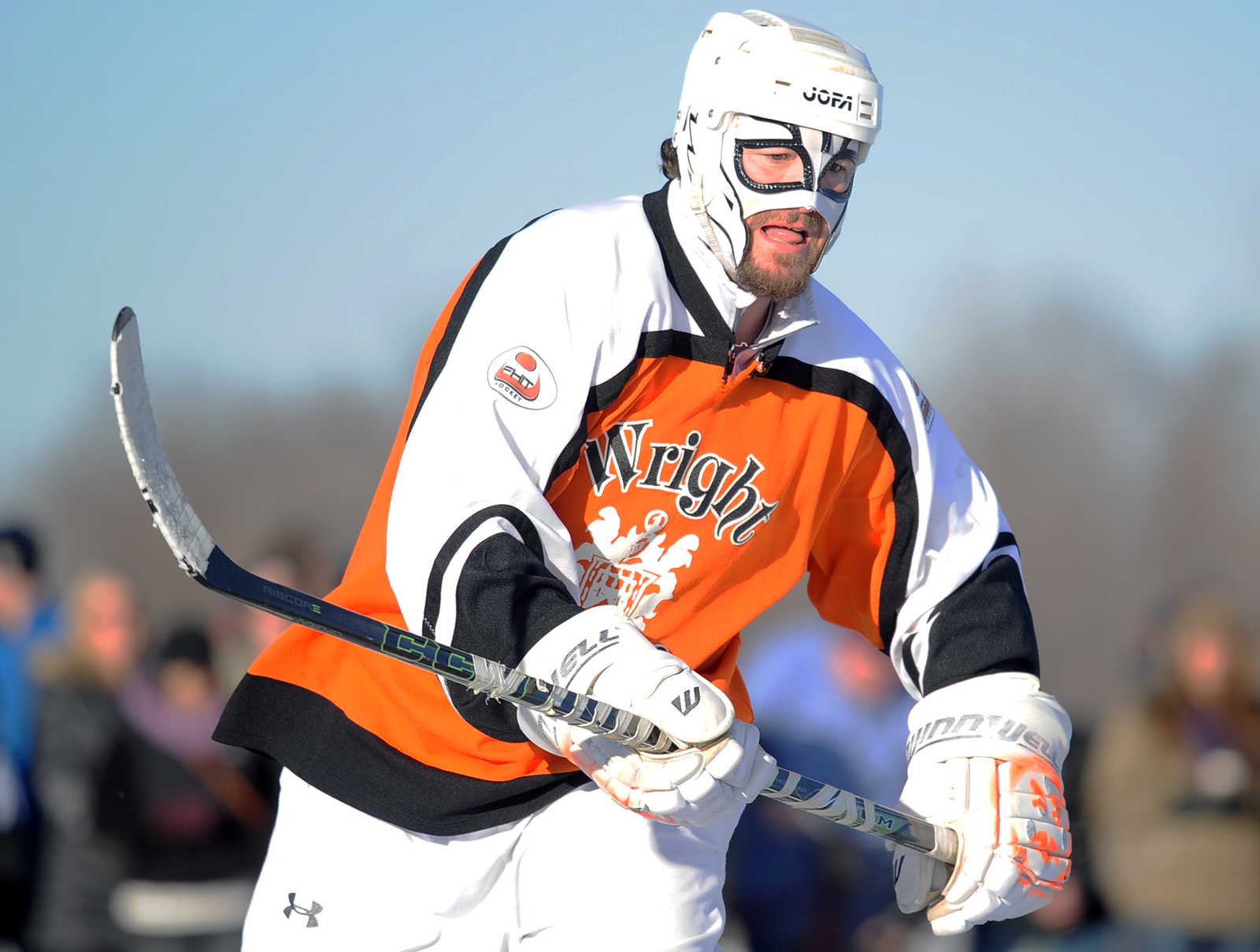 Bloomington native Geno Parish has been a mainstay for Wright Homes/FHIT. Photo by Nick Wosika

First the siren sounded, then came a chorus of boos rising from the championship rink on mushy Lake Nokomis.

The low-toned serenade was the reaction from a boisterous portion of the elbow-to-elbow crowd ringing the knee-high boards to Wright Homes/FHIT winning yet another U.S. Pond Hockey Championships Open Division title.

For their part, Wright Homes players were too stunned, or, more likely, too exhausted, to react at all to Sunday’s 4-3 win over R.J. Ryan Construction. One halfheartedly raised his stick in the air. Four others half skated, half trudged through the slush to their bench.

And then there was Geno Parrish. Wearing a Mexican-styled wrestling mask, the Wright Homes defensive dynamo momentarily transformed pond hockey into a steel-and-ice version of lucha libre (Spanish for professional wrestling) by racing along the boards and joyously high-fiving members of the crowd, not concerned in the least if they reciprocated the gesture.

“There was a group of probably 10 guys here that were avid, vicious R.J. Ryan fans,” Parrish said while gesturing to one end of the rink. “And everything we did was cheap and wrong.

The championship was the sixth in 11 years for Wright Homes, which won the inaugural title in 2006 and again in every even-numbered year since.

“I have come to the conclusion that we are like the Yankees,” said Parrish, who joined Wright Homes in 2008 and has been a mainstay, along with his mask, ever since. “I don’t want to say that as an arrogant thing, but a lot of people don’t like us because we win it.” 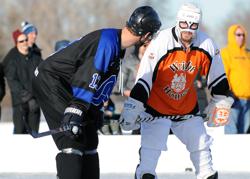 The 41-year-old Parrish grew up in Bloomington, played at St. Cloud State University and spent eight years in the minor leagues. He is the older brother of Mark Parrish, the former Bloomington Jefferson High School standout who played 11 seasons in the NHL.

Parrish said Sunday’s games – Wright Homes beat 10 Meter Radius 1-0 in the quarterfinals and Lululemon 3-1 in the semis to reach the championship  – played in temperatures in the high 30s and on ice as soft as butter, reminded him of his rink rat days at Bloomington’s Dred Scott Park.

“This is like when you were kid playing pond hockey,” Parrish said. “If you showed up and it was like this, you didn’t care. You stayed out and kept playing hockey all day, and you loved it. And that’s what we were doing today.”

The soupy ice conditions, combined with Wright Homes’ suffocating defensive style, only added to the wrestling theme. Clutching and grabbing took precedence over skating and stickhandling, and the crowd wasn’t shy about vocing its displeasure at all the headlocks and takedowns.

R.J. Ryan captain Nate Ryan had no complaints about the style of play. The son of R.J. Ryan Construction co-president Tom Ryan and one of four Apple Valley natives and fromer Eastview High School standouts on the team, Nate said he believes Wright Homes’ annual success stems mostly from its uncanny ability to score from the unlikeliest of angles and locations.

Wright Homes led 4-0 after the first half on Sunday thanks precisely to a variety of half-court and bad-angle shots finding their way into the wooden box that serves as the goal. Dan Donnette and Brad Thompson scored 20 seconds apart as part of the first-half flurry.

“They score on everything,” said Ryan, who with along with several of his teammates played at the University of St. Thomas. “They probably had, what, seven eight shots on net, and, what, they put (four) in. Most of the time you are hoping for five percent of your shots to go in, maybe less.” 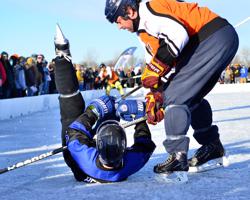 R.J. Ryan Construction has been playing in the tournament for five years, and Sunday marked the first time it had advanced beyond the quarterfinals. Knowing that comebacks are rare on deteriorating ice and weakening legs, scoring the first goal had been the team’s main focus all weekend. So the halftime deficit hardly fit R.J. Ryan’s game plan.

Still, the team rallied in the second half by scoring three goals, including a couple on long-range bombs by Nick Pernula, whose second goal came from half court and in the final minute. Sunday marked R.J. Ryan’s first meeting with the unquestioned kings of the pond.

“I thought that Wright Homes played a good game, and they were more than sportsmanlike out there as well,” Ryan said. “Whether the fans were on our side or their side, it was just a fun game.”

Wright Homes co-founder Dave Bakken, the 48-year-old senior member of a team with an average age of 41, said he knows full well that Wright Homes’ amazing run of success won’t last forever. While the team’s preferred beverage doesn’t flow from the fountain of youth, Bakken said Parrish’s positive attitude has been infectious.

“I know I’m not as good a player as so many of these young guys out here, and sometimes your confidence level can go down,” Bakken said. “That’s where Geno comes in and picks you up. He’s always so upbeat, it’s hard to be down when you are around him. He makes hockey fun for everyone.”

Happy as he was to be playing on Sunday, an exhausted Parrish said he was even more thrilled for the game to end.

“Of all the sirens I have heard at the end of games, or being chased, that was the most pleasant siren I have heard in years,” he said. 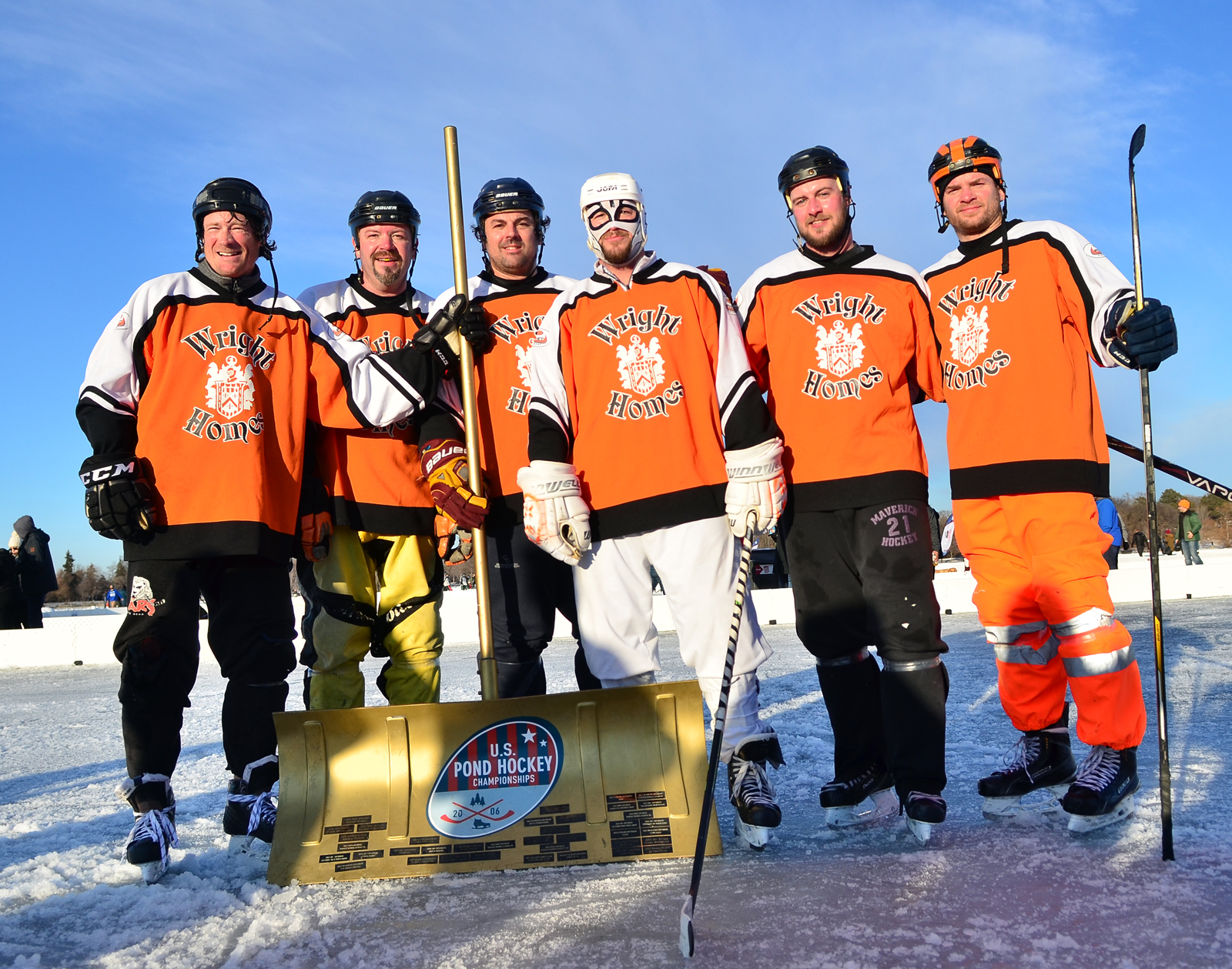 Wright Homes/FHIT strikes a pose after winning the coveted Golden Shovel for the sixth time. Photo by Nick Wosika