Another great weekend on the pond for Haberman and hundreds of others. 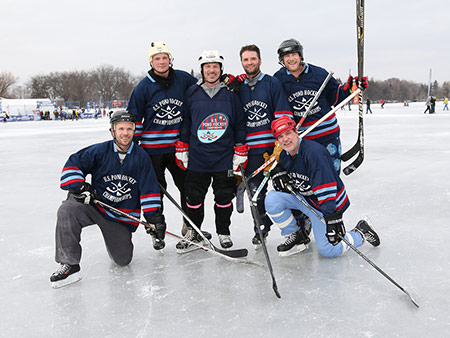 Fred Haberman just made it through his 11th campaign at the USPHC. A campaign that started on Friday morning as he shook hands with his new teammates for the first time. This 11th year on the pond was no doubt bittersweet for Haberman. Bitter in that he was not lacing up next to his ‘nooky blanky’ teammates of the past like Brian Wachtler or Steve Velner. Sweet in that he was embarking in a new chapter of his pond hockey career if you will. One that will bring with it new challenges, and new friendships, as well as a run to the championship game!  Therein lies the beauty, and the mystical power that comes with playing in the US Pond Hockey Championships. This brotherhood of ice hockey players knows no boundaries, for on the ice we are all brothers and sisters. Our common love affair of, and raw passion for playing this amazing game as nature intended makes meeting new teammates a hell of a lot easier than entering most new experiences.

‘We quickly realized that having Freddy join our squad meant so much more than just having access to a swanky VIP locker room with unlimited beer tickets…don’t get me wrong, that was pretty mint.’ Whatrulookinat?’s GM/Player Phil Mero said. ‘Freddy not only led us in goals, but he led us in passion truly becoming our teams spirit animal, quite literally, dudes chest hair is out of control! He was our Tony Robins, our Herb Brooks, our Obe-One-Kanobe, our Richard Simmons, our cowbell, all rolled into one pasty white, excessively hairy package’ Mero went on to add.

This passion for the game can lead to momentary lapses of judgement as well, causing us to ‘swap recipes’ on the ice and often time elbows. However, when that final horn blows those elbows that were just being thrown at one another are now elbows throwing back Labatt Blues together. The power of this amazing game is just that, amazing.

Haberman’s cult-leader like effect on Whatrulookinat? propelled them to their first Sunday appearance, and with it the Championship game. Freddy may not have walked away with his coveted Golden Shovel on this given Sunday, but he walked away with something much bigger; new memories with new friends. After all, isn’t that really what pond hockey’s all about?